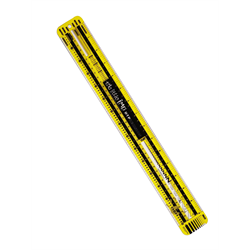 On Backorder. We will contact you with an ETA.
Average Rating

PICAS - Most commonly used unit of measurement for advertising material. There are six picas to an inch and 72 to a foot. The pica is divided into 12 divisions called points. One the Little Imp scale the pica is divided into two part called nonparells (nonperells). The nonparell is exactly 6 to-the-inch and is commonuly used in business forms.

DECIMALS - Ten-to-the-inch. This scale is used mainly for forms work.

POINTS - 12 points-to-a-pica. This very useful scale is used for measuring the distance between baselines of type or distance of a type line from an illustration. It is marked off in increments of two-points with the distance noted every six points.

METRIC CONVERSION - You'll never have to search the Internet for a metric conversion scale again!

TYPE SIZES - Type sizes are in "points" (72-to-an-inch). To establish the point size of a type face, lay the "Z" on the Little Imp on the left on a capital letter or the "z" on the right on a lowercase letter. The point size is the number on the right. The cap height is approximately two thirds of the actual point size because of the descenders on the g and y.

RULES - The lines at the bottom of the Little Imp are some of the widths of rules used for borders, underscores, or design elements. The numbers beside them indicate their width in points.